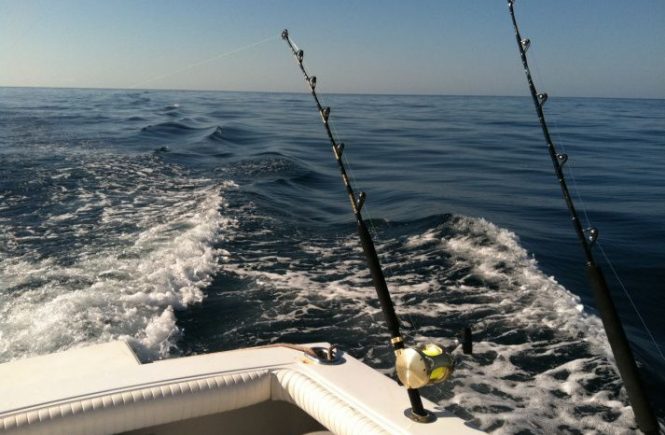 Offshore Trolling can be a very productive way to hook some great fish. However, for fishermen who have never trolled before it can also be a demanding and unusual experience. It usually requires large boats and special equipment, that most fishermen do not accumulate alone. As a result, most trolling is done as part of a guided expedition. So today, reel saltwater fishing brings you some best offshore trolling tips.

Offshore trolling is often described as hours of boredom followed by minutes of mayhem. It is a method that works best when the fish are spread out because it allows fishermen to cover a large distance of ground efficiently and quickly. Trolling is the preferred fishing technique for those anglers who target pelagic fish.

For the individuals who are not familiar with this technique of landing large fish, trolling consists of having a boat pulling the bait, whether it is the lure or live bait, through the water as opposed to having the fisherman cast the bait using a reel and rod. Trolling is practiced mainly in deep open saltwater where larger fish are found more easily, although the modified trolling method can also be used nearer to the shoreline.

The science of trolling is pretty obvious, but far from simple. Regardless of whether a large or small boat, your boat engines produce a variety of mechanical noises: two-stroke or four-stroke with water exhaust, bubble-trail from the spinning prop as it chews up the ocean, and the sprinkling of the hull as it glides through the seas at displacement speeds.

Pelagic species, such as mahi, billfish, wahoo, tuna, and others migrate from distant water, and when going through an area, they are typically exploring favorable forage conditions at hot spots like, wrecks, fathom curves, rock piles, shelf edges/canyons, weed lines, water-color changes, temperature breaks, eddies and areas of whale and porpoise activity.

As is the case with saltwater fish, the fruitful achievement in the offshore or remote canyon waters is to discover the fish-aggregating structures and knowing what to do when it is found. Trolling at the pace range of 6-9 knots in nearshore and the canyon blue waters will get a variety of baitfish into your wake, first, due to curiosity about the sound and sight of your vessel, and at that point the opportunity to hide in white water, especially if the predator fish are in the neighborhood.

Regardless of the efficiency of trolling lures, the method is not easily mastered, particularly compared to the relative ease of natural fishing baits. Unlike live bait, where bait does all the work, lure must be selected, trolled, and rigged, correctly for success.

Choosing Lures: There is no such thing like a perfect spread because different fish species prefer different lures in different positions. Lures with the least action like jets work best for tuna, especially when set well back from the boat. Instead, Marlin prefers active lures that splash and smoke dive and dart and will frequently tear up a lure run close to the transom.

There is a certain tendency among some fishermen to troll as many lures as they can, but less is more effective. It is better to stick to four or five lures in a spread. It is best to fished two from the outriggers, two from flat lines, and often one in the shotgun right in the middle.

When hunting fish like blue marlin, keeping the number of lures to a minimum is recommended. This is because when the fishhooks up and powers off towards the horizon, the last thing to have time for is retrieving half a dozen lures before start chasing down the hook blue marlin. Alternatively, when it’s a tuna hunt, multiple hook links are usually no problem.

Speed can make or break your offshore trolling success, however there’s no particular speed anglers rely on day by day. Variables such as your heading (down-sea or up-sea), weak or strong currents you must cross, winds that vary in direction and strength and the height of waves swells all affect your trolling speed daily.

The best way to control speed is to observe your skirted baits and keep the vibration moving faster and faster until the baits begin to spin. Then slow down until your bait swim true and you have found your speed natural-bait- trolling speeds for the day.

Use the same tactic when it’s slow-trolling, go as slow as possible until the baits no longer swim properly, and then increase your speed. For instance, our four different boats all have different trolling speeds; I use this technique to determine the best speed every day.

One method to help avoid tangle with the flight patterns is to put bird teasers before the long shotgun lure and the rod-rigger lures. This allows you to observe the wake and the lures position on it, and helps direct your steering hand when taking turns. The best trolling guide for your boat should be restricted only by your imagination.

If you have both short and long rigger setup, you should be able to troll up to nine outfits. It is better to run a serpentine course, making it slightly turn into a port or a starboard every few hundred meters. This allows baits to drop and slow down on one side and rise and accelerate on the other side, in addition to making your offerings swim in and out of the white water.

After you select the promising areas to find the fish and mark in your spread, it is time to go trolling. The speed at which you troll is dictated by the circumstances, but will almost always be around 6 and 10 knots. In rough seas it is better to slow down slightly and avoid knocking directly into the sea. It is also best to plan your day so you can go parallel with the waves – not only does this allow the lures to run at optimum, but it also makes riding more comfortable for the crew. Following the sea will provide a pleasant ride but surfing down the waves will constantly cause the lures to blow out as the boat speeds up. Also avoid trolling into the weather, carefully review the buoy weather’s forecast for your area as you plan your trip.

Some crews work over the canyon once and then head to the next canyon. Instead we recommend on focusing on a proven productive area and spend a portion of the day running this area before moving on. Choose your spots carefully and work completely before moving to the next. When the peak bite hits, whether it a change of light or a tide change, it is better not to be on transit.

Once you observe flying birds, work around the edges of the birds. Do not charge directly through them. This will prevent you from spooking any tuna in the area. If there is marlin, shadowing the birds like this will quickly get their attention. Hang around even if you do not get a bite immediately, sooner or later the predators will appear.

And finally, remember that successful offshore trolling is a complex mix of planning and implementation. However today’s modern tool combined with professional experience from captains who has spent years perfecting the trolling spread will help you bring fish to the boat.

And there are some of our best offshore trolling tips. As always, continue to check back at reelsaltwaterfishing.com for all your fishing advice and tackle!