Everything You Need to Know About Surf Fishing 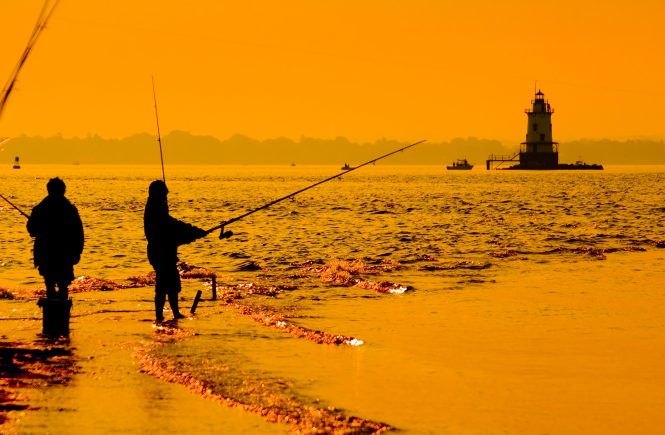 Surf fishing is nothing new to anglers up and down the East Coast and off the shores of New England, but it’s gaining new popularity lately, even spreading down to Florida and through the Gulf Coast region.

in fact, of the 45.7 million saltwater fishing trips taken in America during 2015, fully 50% of those excursions happened on or near the shore — a slightly higher number, believe it or not, then fishing trips on a boat.

The reason for this is pretty simple: boats are expensive, and only getting more so.

And while surf fishing requires its own specialized form of transportation, as well as all the usual gear, it’s still much cheaper and easier than getting out on the water.

It’s also a more physical form of fishing… the intense amount of casting that needs to be done works the entire body more than standing on a boat or pier.

Perhaps the best aspect of surf fishing, though, is that you can enjoy a day at the beach and your favorite pastime all at once!

Despite the fact that surf fishing sometimes gets confused with other forms, it’s a very specific type of fishing.

In the UK they call it beachfishing, but let’s be clear: surf fishing is not pier fishing, bank fishing, shore fishing, or even beachfishing per se. It’s literally about standing from your ankles to your thighs in a rolling tide and casting out into the water.

You’ll catch specific kinds of fish by surf fishing that you won’t get by standing on a pier. You’ll work different muscles, you’ll face different challenges, and possibly more danger than any other form of land fishing — so you will need to ease into it.

Surf fishing is all about casting, so you’re going to need to get a saltwater spinning reel and a specific type of surf rod, anywhere from 12 to 16 feet long. (Some very experienced surfcasters use a baitcasting reel, but those are definitely not for beginners.)

Get a sturdy rod, graphite if possible, with a wooden butt — especially if the beach you’re on happens to be rocky.  Make sure your line isn’t lightweight: 20 to 25 pounds at least.

With a rod this big, you’re going to want a professional rod holder or sand spike. Anything homemade or makeshift is going to create a real problem.

The other equipment is standard: a good knife, a solid pair of pliers, a bucket for your catches.

Your best bet is always to hit the beach with the tides: early in the morning, just after the tide starts to roll back in, or just before and just after high tide when fish are coming in to feed.

If darkness has fallen, however, fishing becomes a little bit more dangerous for you and for others. Remember that you’re more than likely sharing a public beach and you need to make very sure that you’re not casting into an area full of surfers, swimmers, or kids.

This is why a few hours after low tide usually works best to start. Watch your local school of fishermen and see what they do!

Surf casting doesn’t require a boat, but it does involve moving up and down the beach with your equipment.

If you have a vehicle that’s beach-ready and you’re not violating any ordinances, load it up — but remember that you’ll still be walking on sand with a bunch of equipment, so you’ll want some sort of a packframe.

Finally, don’t forget that your 4×4 or SUV will need to have its tires deflated somewhat before you can take it on the beach. Even if you have four-wheel drive, you’ll probably need a permit to make it a true “beach buggy.”

Pick out a spot and head over at low tide to see the contours of your fishing area. Make sure you’re either alone or near nothing but other fishermen.

The sweet spot is often the last sandbar that the waves are breaking on, the place where those dangerous rip currents hide, where the shallow water becomes the sea.

You’re going to need a six-ounce weight on your line, if only to make sure that you’re really dragging the bottom out there. Pyramid sinkers and spider sinkers are best.

Those rip currents will want to drag your line out, which could be a real problem if other fishermen are down the beach from you.

As for bait, note what species of fish are in the area and use whatever live bait they feed on. Fresh shrimp always works great. Crabs, worms, squid, sand fleas, bull minnows… simple stuff.

Whatever you do, don’t keep your bait out in the open! Seagulls live for a surf caster’s bait.

Finally, we come to the most important part of the surf casting experience — and that is to stay safe in the water.

Unlike other forms of fishing, you may be halfway in the water already or have dangerous jagged rocks nearby. if you’re going to wear waders, be sure to pack a wader belt so you don’t get caught in the tide yourself and swept out to sea.

Those rip currents you’re fishing are no joke.

Master the Sea on a Budget!

Surf fishing lets you get physical with your angling without spending a fortune to do it: you can do that Hemingway mano-a-mano thing with the ocean without having to actually go out on it.

And the catches you haul in can be amazing, no matter where you are.

Pompano, flounder, blue and red fish mainly, but also sea trout, barracuda and occasionally a shark or two could find its way onto the end of your line. Whiting and striped bass are also prevalent.

So don’t save up money to buy a boat and get away from it all, be a beach bum and an angler at the same time by learning how to surf cast.

Surf fishing lets you have it all!